THE HISTORY OF FATHER CHRISTMAS

We all know and love the familiar figure of the jolly fat man, dressed in red with a long white beard, who whizzes around the world on his reindeer-pulled sleigh every Christmas Eve distributing presents to children who have been good throughout the year. But where did Father Christmas come from? How is he different from Santa Claus? And does he bear any resemblance to the ‘real’ Saint Nicholas on whom his character is supposedly based? Sophie Keay investigates… 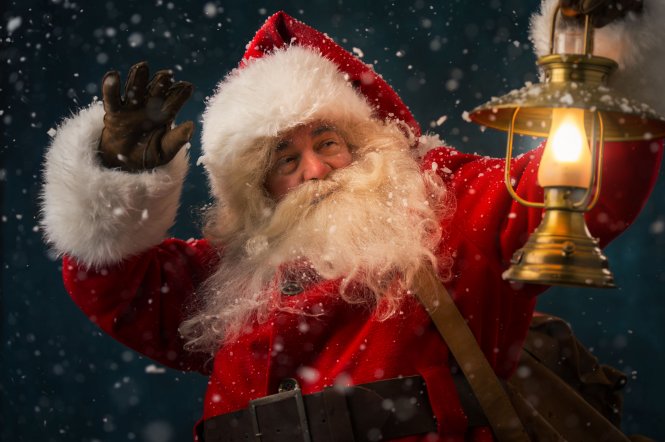 There’s an urban myth that the modern-day figure of Santa Claus is entirely the invention of the marketing department of Coca-Cola, who are reputed to have designed and created him for the purpose of selling fizzy beverages. While the giant

brand certainly played a part in popularising a particular image of his American incarnation, Santa - or Father Christmas, as many on this side of the pond prefer to call him - is a great deal older than any vegetable-based soft drink.

In fact, there are at least two distinct lineages that can be traced for the jolly festive figure. One grew out of a reaction to the Puritan desire in the 17th century to suppress Christmas merry-making. The other, much older, tradition is based on the fourth century Christian saint who would become, in the popular imagination, ‘Old Saint Nick’.

The earliest known personification of Christmas comes from a carol dating to the middle of the 15th century, in which Christmas delivers news of Christ’s birth and invites everyone to “make good cheer and be right merry”. By the first half of the 17th century - partly in reaction to the developing puritanical mood - he’d become “an old reverend gentleman in furred gown and cap” (Thomas Nabbes, 1638). By 1686, according to pamphleteer Josiah King, he was firmly established as a merry old soul “who, when he came, looked so smug and pleasant, his cherry cheeks appeared through his thin milk white locks”.

But Father Christmas’s rise to global fame and popularity really happened with the Victorians. Drawing on traditions brought in by the Queen’s German husband, Albert, and combining a variety of ancient and newer customs, the English crafted an early version of what we would certainly recognise as a typical Christmas. Charles Dickens was one of many writers of the time who captured the mood and helped crystallise it, formalising elements such as the Christmas tree, the festive feast and, of course, Father Christmas himself.

Perhaps the most significant depiction of the “jolly old elf” came in a poem entitled A Visit From St Nicholas, first published in 1822 and illustrated in a landmark edition in the 1860s. Clement C Moore’s poem, and Thomas Nast’s later engravings, gave us Father Christmas almost exactly as we know him today. As a result, the poem has also survived, although these days it’s better known as The Night Before Christmas.

But what of that other, older tradition and the man whose name became transformed into the modern-day Santa Claus? Saint Nicholas was a real person, a Christian bishop living in what is now Turkey in the fourth century. Little is known for sure about his life, but there are plenty of legends about him that have contributed to the image of a charitable, chimney hopping chappie bringing gifts for the children.

One story, for instance, claims that he was shy about his generosity, so would drop bags of coins down people’s chimneys anonymously at night. Another variation has him depositing cash this way to help allow a poverty-stricken merchant’s daughters to be married with a dowry. By chance, the money bags fell into the girls’ stockings, which were hanging by the fire to dry. In other tales, he is renowned for putting coins into the shoes of anyone who left them out for him. Whatever the truth behind the legends, it is Saint Nicholas - whose name became varied to Sinter Klaas in Dutch - who provided the template for the Santa Claus we know today. It’s thought Dutch emigrants in the 18th and 19th centuries took the name and character with them to America. There, he subsequently became a symbol of Christmas, even though his feast day actually falls on 6 December.

As the world, and the West in particular, has grown more homogenised, the two highly similar personalities of Father Christmas and Santa Claus have increasingly merged into one. With the help of the global Coca-Cola corporation, whose Yuletide advertising campaigns since the 1930s have regularly featured the same red-cloaked character, he has almost ceased to exist as two separate entities, and the names have become virtually interchangeable. But whatever you want to call him, the history of the cheery old man with the big white beard, dating back into the mists of time, suggests he’s going to be around for a long while yet.

OTHER ENTRIES
CHRISTMAS PRESENT IDEAS FOR...
CONFIDENCE AND TESTS TECHNIQUE
THE SHORTAGE OF ADRENALINE...
THE QUESTION OF VIOLENCE - ...
INTERVIEW WITH DAVID...
SUMMER READING - OUR...
SUMMER READING - OUR...
NEW GYM IN TOWN!
BEAUTIFUL GIFTS THAT MAKE A...
WHEN KIDS HAVE THE BLUES...
MOTHER'S DAY PRESENT IDEAS
PREPARING OUR CHILDREN TO BE...
GROWING UNDERGROUND - FARMING...
INTERVIEW WITH ALEX POLIZZI
CHRISTMAS GIFT IDEAS FOR ALL...
FREE SKIING HOLIDAY WITH A...
INTERVIEW WITH AUTHOR HENRY...
STAYING AHEAD OF SPORTS...
CHILDREN'S MENTAL AND...
ORDINARY MAGIC - STRATEGIES...
REVISION TIPS
EATING DISORDERS
LOOKING AFTER YOUR MENTAL...
BENEFITS OF INTRINSIC...
PRE-PAID CARDS - ARE THEY THE...
HELPING HATS
COLLECTING CONVERSATIONS
INTERVIEW WITH ANDREW CASTLE
CHRISTMAS PRESENT IDEAS FOR...
CHILDREN'S ILLNESSES -...
USING AAI'S IN MEDICAL...
WHY IS EARLY YEARS EDUCATION...
WHAT IS THE SECRET TO THE...
THE ADVANTAGES OF PRIVATE...
WELCOME TO THE RIG!
GLOBAL YOUNG LEADERS
THE HISTORY OF FATHER...
SOCIAL MEDIA