LIFE AFTER GMTV - SOPHIE KEAY FINDS OUT WHAT HAS BEEN KEEPING HIM BUSY SINCE... 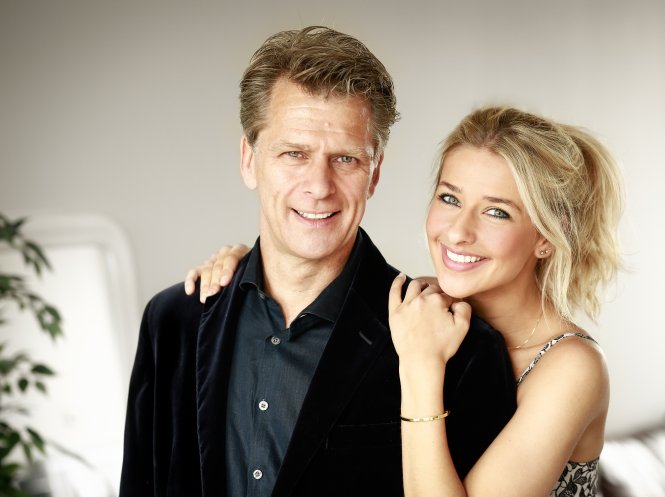 Andrew and his daughter, Georgie

What are you to up at the moment?

I present weekend breakfast on LBC radio between 7 and 10am. It’s about the busiest news time I can ever remember really, I have been with LBC for a while now and everything seems very dramatic and polarised at the moment. That’s the main job and I present the Smooth Sanctuary on Smooth Radio each Sunday evening between 6 and 10pm, which ends the weekend on a calmer note. I commentate on all BBC tennis including Wimbledon and the Australian Open and I host corporate events as well - presentations and speeches. It keeps me busy enough.

What do you do for downtime/relaxation?

I watch The Sopranos and I trawl the internet until I have seen every ship being tossed about in heavy seas, every diver’s fight with a shark and every giraffe running after tourists. I’m sure I’ve also seen every political interview anyone has ever done too. When I can’t watch anymore I listen to music!

What is your guilty pleasure?

I possibly just answered that in the previous question! Eating dark chocolate after dinner – I’m not going to tell you the rest!

Why did you choose to live and stay living in South London?

It’s where we landed really. I am from Taunton in Somerset originally and got to know the places where I played tennis which were mainly in South London. My brother’s advice was to get onto the housing ladder so, as soon as I began playing professional tennis, that’s what I did. The first flat that I bought was in Southfields in 1986, and was very lucky that I could do that – it’s much harder for youngsters today. We were then in Wimbledon before moving to an area in Clapham now known as Abbeville Village - some 28 years ago, it wasn’t what it is now. We’ve lived in Balham for about 17 years and that area too has changed. People now aspire to live here and it’s pretty cool that now it’s such a desirable place.

We’re not wed to anything particularly – I know the ones I don’t like but you probably can’t publish those!

How is life as a celebrity in South London?

Generally speaking because of GMTV and the tennis people feel like they know me and we talk because of that. Sometimes people will say ‘oh hello, we met at so and so’s last month’ or ‘I know you from somewhere’ and we go from there. It’s fun most of the time. Sometimes people will say they don’t like you and your commentary in which case I can say I don’t like them either...and have a nice day!

Your girls have a very different life to yours growing up - what have your taught them that is important regardless of wealth?

What a formidable question, they are 25 and 23; Claudia is my youngest and works at the Football Association, working a little bit with the England Football Team and organising the FA Cup – she is doing great. My older daughter, Georgie, plays the role of Sophie in Mamma Mia in the West End so is getting on really well too. All we have ever asked is that they try hard and commit to what they are doing and I think they have both done that. I like they way they deal with people, they are both polite and I couldn’t be more proud. They are great company and far less embarrassing in a public space than I am! They are a credit to themselves.

Do your family enjoy living in London?

Clapham Common is our playground and we love this place. Georgie really is a city girl. She loves the countryside as well but adores London - I can’t imagine her being anywhere other than a big city because of her work. Claudia I see as more of the country girl and can see her moving out of London one day. We all love Clapham and it’s going to be hard to leave.

Judging by that comment, I presume the rumours that you are moving out of London are true?

Yes, we are actually building a house in Cobham, Surrey. It’s always been something that could happen, we’ve always loved where we’ve lived and enjoyed our space but because we couldn’t find our ideal house in the area, certainly no-where that we could afford, we thought we’d try and build one. We have a long road ahead but the process is underway.

Are you going to keep a bolthole in London?

It’s only Cobham - 15 minutes from Wimbledon. I guess that’s why the prices are what they are – hence building. It feels like we are getting country without really being in the country. Plus there will be no money left after all this. 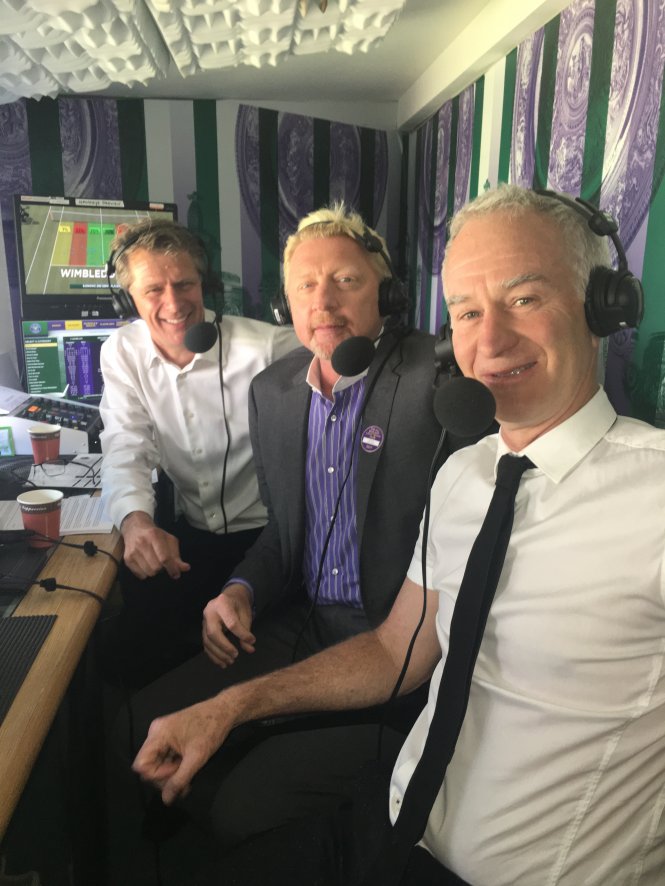 Your Twitter account currently has over 44k followers – do you enjoy being part of the social media culture?

Social media culture is probably the most divisive aspect of all our lives at the moment – I’m worried about it. I think it’s causing mental breakdown amongst the young and the evidence is showing that it is more young women who are being hammered by this than young men. All the long-term studies are showing enormous damage and I think we are approaching a time when every single school should have a fully trained mental health nurse on their full time staff. With social media, you project your image for everyone to see, you offer yourself, mind, body and soul to the world and you ask people to come back and talk to you about what they think – it is so dangerous to one’s feelings and it’s so full of potential hazard, its almost immeasurable for me. I am so very glad that I didn’t grow up with it.

Presumably it plays an important role in your life being in media?

I don’t know how important it is to me at all actually, and I take a little holiday from it now and again. Obviously working on LBC with social media and news coverage, it’s important that I keep up to speed with what’s going on. In terms of an image and what you portray, that balance for me is a difficult one. I’m 54, ugly and I’ve been around but you start talking about 13 and 14 year olds with their emotions and sensitivity bared for the world to see and I think it’s hazardous. I think the internet is a force for good but expectations have spiralled creating disappointment and disillusion. We must remember that real success is not instant and nor is real gratification.

Do you still play tennis?

Oh yes - I played last night with an 11-year old boy who is the son of a friend of mine and he is brilliant. I play at Wimbledon, a privilege I know. There are many players there, most younger than me, men and women and they tolerate me on court. This year in the Club Championships at Wimbledon I am playing with Jeremy Bates and I have to say I am enjoying the game as much as I have ever done. To walk out onto the court at Wimbledon in the sunshine with friends (albeit in shorts and bearing my skinny legs) and to play on the grass is more than a privilege and I am very grateful. I loved the game the first day I played at the age of 9 and have loved it ever since.

Are you fit again after your hip replacement?

Yes, I would recommend one of those! More recently I had a ruptured scapholunate ligament in my wrist which was a potentially career ending injury and far worse than a hip. It took a year to mend and I missed the game so much. I had to miss the over 45s Championships at Wimbledon which was terrible at the time. Luckily it healed well and I can now play again.

During your professional tennis career, who was your favourite opponent and why?

Anybody I could beat was my favourite opponent! I enjoyed playing Stefan Edberg and actually after he retired I played lots of squash with him. I also loved playing Boris. Sampras was fun to play against, he was only 18 when I played him first but even then he was doing things that were different from everyone else and you know when you are playing someone special. I play occasionally with McEnroe, normally after we have worked together. John has a unique talent; his tennis was always something I found beautiful to watch.

Do you miss serve and volley tennis?

The tennis has changed completely, it’s very difficult to come to the net and actually cover passing shots. The art of volleying is being lost because of the power in the rackets and the strings. You can feel like a sitting duck at the net nowadays.

In the last 10 years we have only seen a total of 7 Grand slam winners, do you think we will see this type of domination again and who do you think are the next generation of tennis superstars?

If I had to pick one man who I would like to see come through it is Gregor Dimitrov. I still think we have yet to see his best. He won in London at the World Tour Finals against another player who I think is also very capable, David Goffin. Dimitrov has been a superstar since he was 13 – he’s just got star written all over him. He’s got it all – he looks the part, hits tennis balls beyond belief and he is a great guy. There is also another guy who I love watching play and that’s Dennis Shapovalov from Canada.

And Britain’s Kyle Edmund is flying up the rankings. He’s learning how to get the best out of his game; he’s got a massive game and a fine coaching team, not to mention a loving and supportive family. Expect great things from him.

With your experience of having had a hip replacement, do you think Andy Murray could return to professional tennis if he ends up needing this operation?

He has just had the same operation as I had before I had my new hip done. This is a comparatively minor clean-up operation. Because hip knowledge is advancing month on month with research and knowing Andy and having watched him since he was a kid, it wouldn’t surprise me at all if he became the first person to have a new hip and go deep into a grand slam. He is so driven, so good and he so loves tennis. Everybody reacts differently to surgery and he may well have 2 or 3 more years playing after this operation and it maybe perfect, in which case he may be back. Lots of unknowns. Even at my old age when I snapped my wrist ligament taking the game away, I was really emotional. He must have been wondering if he would ever play again but hopefully he has another chance now, which is fantastic.