A comedy legend, actress, broadcaster, writer and self-confessed lover of wine, Helen Lederer has been entertaining the British public with her unique brand of humour for more decades than she cares to remember. Sophie Keay caught up with her in SE London to find out how it all started and what she is up to now… 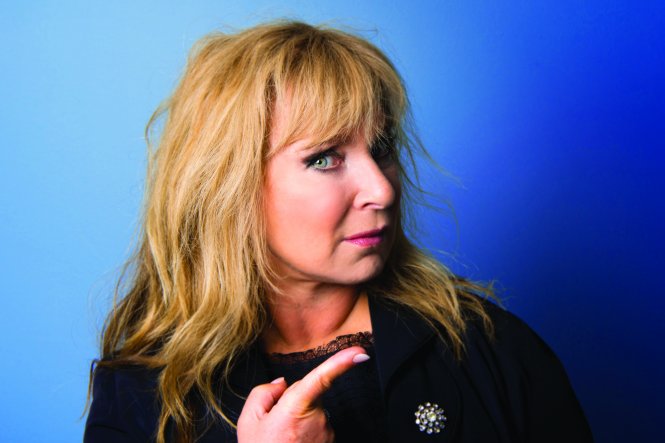 How did it all start and when did you get your first break?

I always wanted to write and perform but lacked confidence and took another route via sociology and social work. Then I went to drama school at an ancient age of 28, found a double act partner and we performed on the circuit. Then I went solo and auditioned for a comedy sketch show called ‘In One Ear’ for BBC Radio 4 and after that it sort of developed.

You are probably most famous for your role as Catriona in Ab Fab but what has been your most favourite show to be part of? Why?

My most favourite part was playing the maid to Dawn French’s cook in Ben Elton’s ‘Happy Families’ for BBC. It was fantastic series and Stephen Fry, Hugh Laurie, Jennifer Saunders were in it. I played a rogue maid and rather loved it.

What do you prefer – comedy acting or stand-up?

Stand up is more immediate – both when it goes well and badly! I love the chance to find the funny bone in character parts when I’m lucky enough to have been offered them.

Do you come from a family of comedians?

No, but both my parents were good storytellers and I grew up in a household where people enjoyed telling a tale in a funny way.

Your daughter, Hannah, initially followed in your footsteps – is she still acting?

No! She has developed her own path completely – lots of travel and more recently trained as a chef and working in the beautiful island of Ibiza cooking for retreats and creating recipes and filming them. All very different from me and I’m very proud she has found her path on her own - Ibiza is a nice place to visit as well.

You performed at the Edinburgh Festival in 2018 – what have you been up to since?

Oh, my word – well I have set up the Comedy Women in Print prize www.comedywomeninprint.co.uk that has taken all my energies it seems. A passion project which creates publishing deal for an unpublished writer and shines a light on witty women writers - about time! I am writing my own comedy memoir and second novel. We have just published the longlist - Marian Keyes, the bestselling author, is head judge and we have other amazing judges including TV’s Joanna Scanlan.

You have written and published a number of books – are there any plans for more?

Yes, I’m working on two at once which may sound mad - also a wine project that is in the offering when lock down ends.

Are you still presenting on Radio 4?

I presented BBC Radio 4 ‘Pick of The Week’ before lockdown and had a great time on BBC Radio 4’ ‘A Good Read’. I love radio - you don’t have to dress up.

How long have you lived in Dulwich and what are your favourite haunts?

I think about 18 years. I love Horniman Museum gardens and ‘The House of Tippler’ for unusual cocktails and music. I also love the flower shop on Northcross Road for amazing chunky stems and ideas…

Having always been so busy with your career, do you find it hard to relax?

Yes, but this time is giving me the idea to sit outside and read - I never used to before. I have to read all these 14 fab books on the Longlist - even though I’m not a judge I have to know what everyone’s enthusing about.

What is your guilty pleasure?

Are you thinking about slowing down any time soon?

No, I guess I appreciate the time I have and want to make it count. I have to remind myself that stand-up comedy is a young person’s game and rightly so…but there are other ways to do things and keep focussed.