GROWING UNDERGROUND - FARMING BENEATH OUR FEET…

Under the streets of Clapham, 100ft down, lie a series of linear tunnels built under Northern Line stations between 1940 and 1942, which are now housing the world’s first Underground Farm. Having originally been air raid shelters in World War II, they are now home to Growing Underground, creators of a hi-tech city business who are changing the face of farming as we know it. Richard Ballard, one of the co-founders, invited me down for a chat and a tour. 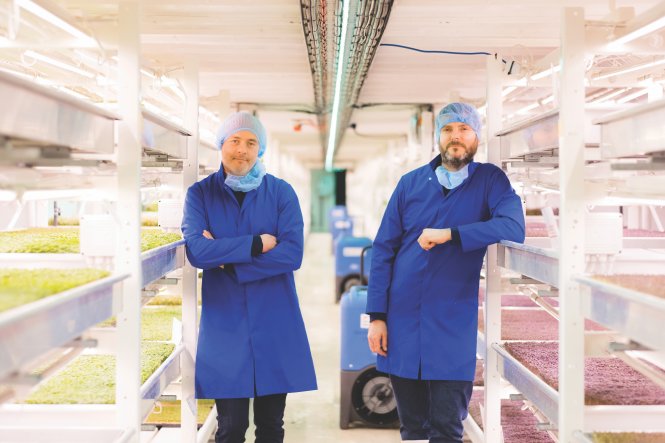 Growing Underground grow a selection of mini greens using the latest technology in LED lights and hydroponics - a method used to carry nutrients through water. This state-of-the-art technology means that the plants don’t need natural light and can grow in water rather than soil. Lights are switched on at night and therefore daytime for the plants is between 5pm – 7am. Heat from the lights balances the overnight temperature and makes the most of cheaper night-time electricity. To maximize growth and yield it is vital that temperature, humity, CO2, air velocity and movement are maintained with lights and fans ensuring that the tunnels are kept at a steady 20-25 degrees year-round, day and night.

No pesticides are used on the Farm, just a standard fertilizer for micro greens. I gathered from Richard that they had tried some organic nutrients in the beginning but they weren’t very stable. “We can’t be Organic because we don’t use soil but our aim is to be Organic Best Practises in the future. At the moment we are unable to change the nutrients we use because we only have one growing area and if it doesn’t work it could ruin the entire crop. When we expand we will have more scope for trials of other products”.

The tunnels are filled with a series of pink LED lights, creating a futuristic pink glow and a striking image as you enter the Farm. I gather from Richard that pink is unusual “other farmers use red and blue lights as plants only need, and take, red and blue light from the spectrum. One of the problems when using just the red and blue light is that the plants appear black, whereas with pink light you can actually see the green crops growing and signs of disease can be seen and dealt with quickly. In trials it has also been found that the broader light spectrum adds to the overall flavour of the plants”.

It makes sense to use lights and electricity to enable things to grow in an environment where the process is not affected by adverse weather conditions, allowing things to grow quickly. To illustrate the difference between growing underground as opposed to above the ground, Richard tells me that “farmers growing pea shoots above ground can achieve 6 harvests a year, in a greenhouse they achieve 25-30 harvests and down here we can achieve 60 harvests a year. At the moment we can’t compete with conventional growers that grow commodity products like heads of lettuce and spinach who, even out of season, can import products at a lower price. It’s not environmentally better but its economically better which is currently what decides the market”. 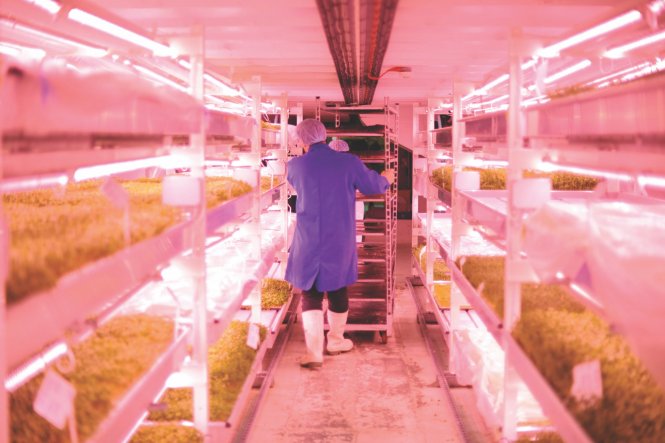 The Mini Greens grown in the Farm include pea shoots, garlic chives, fennel, coriander, basil and parsley. As the name suggests they are a smaller version of what we are used to seeing in the shops and are therefore have more intense, stronger flavours. The Farm also produces baby leaves and they plan to move to heads of lettuce when they are in a position to meet the current market prices.

Even with the huge turnover of products - 1-3 kilos being produced per week per square meter- there is very little wastage with plants mainly being grown to order. They currently sell through New Covent Garden Market and into the food service as well as retailing through M&S and Waitrose.

Expansion is imminent and Growing Underground hope to move into the full tunnel space in the very near future. They currently use 528 square meters of the available tunnel space and the full tunnel will be approximately 7 times bigger with 3,500 square meters of space. In the larger space, the plan is to produce more of the same but ideally increase their crops of baby leaf and consider a wider range of micro greens.

This is Richard’s first experience of farming. Up until 2008, he ran a garden furniture business in Bristol and it was when he returned to London to do a film degree that his studies led him to explore ‘hidden London’ and research for his final thesis focusing on the future of cities; providing food and power to future generations. Richard’s partner in the business, Steven Dring, previously a corporate man, was keen to get involved and the vision became a reality.

Research and Development started in 2013 and took place in the Clapham North area of the tunnel, the business only moving to the Clapham Common tunnel once funds had been raised to build the Farm. Crowdfunding campaigns took place in 2014 and additional private investors were invited to come on board.

Being just a couple of ordinary guys from Bristol, they were keen to bring someone in who would give some weight to the project. Their plan was to bring a prominent chef on board, someone who would have a keen interest in the products and who could boost the profile of their brand. Michele Roux Jr became involved as a Non-Executive Director in 2015. Richard told me that “Michele, knowing Clapham well and having played on Clapham Common as a child, was very keen to be part of the business from an early stage. He is a great asset and support to the business.”

The Farm is working towards carbon neutral certification, their carbon footprint being off-set against reforestation projects and similar schemes. All their power also comes from renewable energy companies and food miles are limited as they are able to keep produce local. The hydroponic system uses 70% less water than traditional open-field farming and all nutrients are kept in a closed loop system avoiding any agricultural run-off.

Recycled pieces of carpet - reformed as capillary matting – are used as base for growing the plants. This is only used once but, when discarded, is transferred to a waste-to-energy converter, the electricity produced being used to off-set their carbon footprint. In an ideal world Richard tells me that they would use another more compostable sub-straight which could be broken down into a pulp, like paper, but they need to wait for trials of the product first.

Another aspect of the business they are looking to change when at all possible is the plastic packaging. One important reason for using this current packaging is that it extends the shelf-life of a product which wilts quickly. They are looking into alternatives at the moment, compostable packaging being one of them. As Richard says “single-use plastic for food has got to go but we need some viable solutions”.

When asked about the competition, Richard told me that “there are a couple more container micro green growers in London but our story and narrative helps us to get our products into the market”. 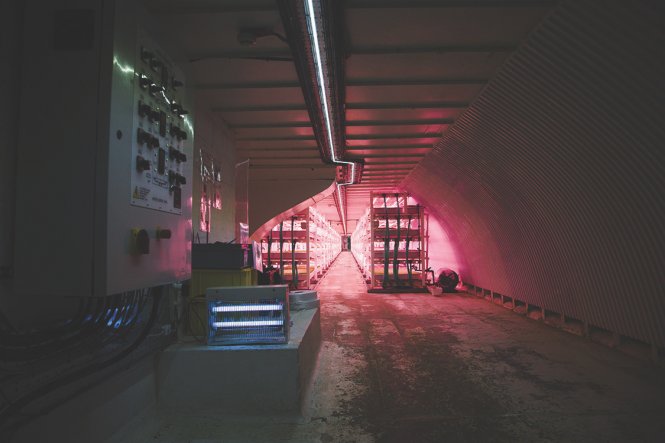 Growing Underground have recently started offering tours of the Farm. These are scheduled for Tuesday and Thursday evenings and tours are with either Richard or Steven, the Co-Founders. They book 12-16 people per tour which includes a talk about the business and their journey, tour of the farm, explanation of the process and the chance to try the crops. Visitors must be over 14yrs+. Individual, educational and corporate tours are catered for. Discounts offered to school groups. More details on our What’s New pages.

Be prepared to remove jewellery, put on a hair net (and a beard net where necessary) swap shoes for wellies and top it all off with a clinical white coat! Fascinating, fun and informative - I thoroughly enjoyed my tour and am sure you will too.