Most of us will know of someone in our lives suffering from an eating disorder and we have written this article with the aim of informing and helping parents, children and young adults to recognise the early signs of eating disorders, concentrating specifically on the two most widely recognized – Anorexia and Bulimia.

What are eating disorders?

Eating disorders are serious mental illnesses that involve disordered eating behaviour. This might mean limiting the amount of food eaten, eating very large quantities of food at once, getting rid of food eaten through unhealthy means (e.g. purging, laxative misuse, fasting, or excessive exercise), or a combination of these behaviours. It’s important to remember that eating disorders are rarely about fooditself, but about feelings and stress.The way the person interacts with food may make them feel more able to cope, or may make them feel in control.

·      Eating disorders – including anorexia nervosa, bulimia nervosa –are not due to a failure of will or behavior; rather they are real, treatable medical illnesses in which certain dysfunctional patterns of eating take on a life of their own.

·     An estimated 1.25million people in the UK have an eating disorder

·     The condition can affect anyone at any time, but girls and young women aged 12-20 are most at risk

·     Eating disorders are treatable and people do recover fully

·      The causes of eating disorders are complex and not fully understood but include a mix of genetic, biological and cultural factors.

·      Eating disorders frequently occur together with other psychiatric illness such as depression or anxiety disorders.

·     The earlier someone gets the treatment and support they need, the more likely they are to make a full recovery

·     The number of people seeing help and treatment has increased over the past 20 years but it is not known whether the illnesses themselves are becoming more common.

FACT: Eating disorders are serious, mental illnesses requiring prompt, appropriate treatment. Anorexia is the illness where people restrict the food they eat to a harmful extent. People with bulimia are rarely underweight.

FACT: Eating disorders can affect people of any age, gender, culture, ethnicity or background. Girls and young women aged 12-20 are most at risk. Up to 25% of cases could be boys and men.

MYTH: Eating disorders are only a modern phenomenon.

FACT: Eating disorders were first observed and recorded in the 1680s and have been known throughout history. The pressures and pace of modern life and the spread of a global westernised culture play a part in any reported increase.

FACT: People with eating disorders do not choose to be ill, and they are not trying to seek attention. They can find it very difficult to believe that they are ill, and equally hard to acknowledge it once they do know. This is one of the most challenging aspects of how the illness affects someone’s thinking and behaviour.

MYTH: No one ever really recovers from an eating disorder you’ve got it for life.

FACT: Eating disorders are treatable and full recovery is possible. There can be serious long term consequences to physical health if the conditions are not treated quickly. Some people do develop a long term or recurrent eating disorder, but treatment is improving all the time.

MYTH: You can tell just by looking at someone if they have an eating disorder.

FACT: Eating disorders are mental illnesses – so it is someone’s thoughts, feelings and emotions that are involved. Eating disorders come in all shapes and sizes and not everyone affected will be very underweight or even ill-looking.

FACT: Parents don’t cause eating disorders. The causes are complex and many factors are involved. Parents and families can play a vital part in helping their loved ones beat an eating disorder, and the more they learn to understand the condition, the more they can help.

MYTH: People with eating disorders are just trying to look thin like their celebrity idols.

FACT: People with eating disorders typically have very low self esteem and feel worthless. They are more likely to wish to disappear and not be noticed than want to draw attention to themselves. 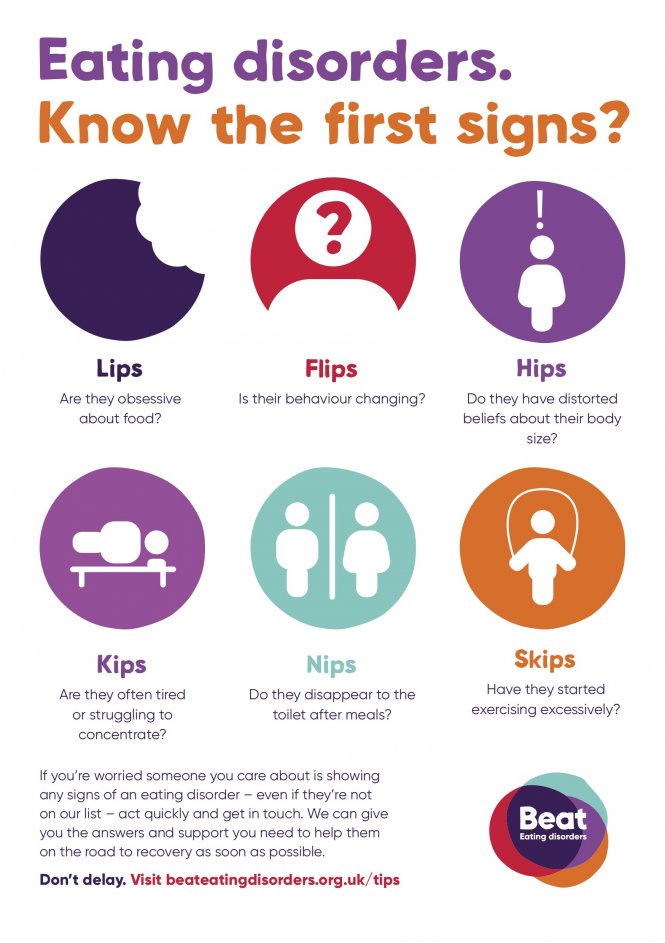 The compulsive behaviour of many people with eating disorders means that, without help, they are often totally incapable of addressing the issues they might have. They are usually unaware of the harm they are doing to themselves, despite warnings from friends and family, and are often totally in denial of the situation.

* THANK YOU TO BEAT EATING DISORDERS FOR ALLOWING US TO USE INFORMATION FROM THEIR WEBSTIE IN THIS ARTICLE.

If you are worried that someone you care about is showing any signs of an eating disorder – act quickly and get in touch with Beat or one of the other organisations on our list below.

Advice and support for anyone affected by an eating disorder.

Men Get Eating Disorders Too

Information and support for men with eating problems.

Support for young people (under 35) struggling to cope.

Provides information and advice for anyone with concerns about the mental health of a child or young person.

OTHER ENTRIES
CHRISTMAS PRESENT IDEAS FOR...
CONFIDENCE AND TESTS TECHNIQUE
THE SHORTAGE OF ADRENALINE...
THE QUESTION OF VIOLENCE - ...
INTERVIEW WITH DAVID...
SUMMER READING - OUR...
SUMMER READING - OUR...
NEW GYM IN TOWN!
BEAUTIFUL GIFTS THAT MAKE A...
WHEN KIDS HAVE THE BLUES...
MOTHER'S DAY PRESENT IDEAS
PREPARING OUR CHILDREN TO BE...
GROWING UNDERGROUND - FARMING...
INTERVIEW WITH ALEX POLIZZI
CHRISTMAS GIFT IDEAS FOR ALL...
FREE SKIING HOLIDAY WITH A...
INTERVIEW WITH AUTHOR HENRY...
STAYING AHEAD OF SPORTS...
CHILDREN'S MENTAL AND...
ORDINARY MAGIC - STRATEGIES...
REVISION TIPS
EATING DISORDERS
LOOKING AFTER YOUR MENTAL...
BENEFITS OF INTRINSIC...
PRE-PAID CARDS - ARE THEY THE...
HELPING HATS
COLLECTING CONVERSATIONS
INTERVIEW WITH ANDREW CASTLE
CHRISTMAS PRESENT IDEAS FOR...
CHILDREN'S ILLNESSES -...
USING AAI'S IN MEDICAL...
WHY IS EARLY YEARS EDUCATION...
WHAT IS THE SECRET TO THE...
THE ADVANTAGES OF PRIVATE...
WELCOME TO THE RIG!
GLOBAL YOUNG LEADERS
THE HISTORY OF FATHER...
SOCIAL MEDIA