ROCKING THROUGH THE AGES

With Royal families amongst their treasured owners, you might wonder how it all began for Stevenson Brothers Rocking Horses. Sophie Keay popped down to Kent to find out… 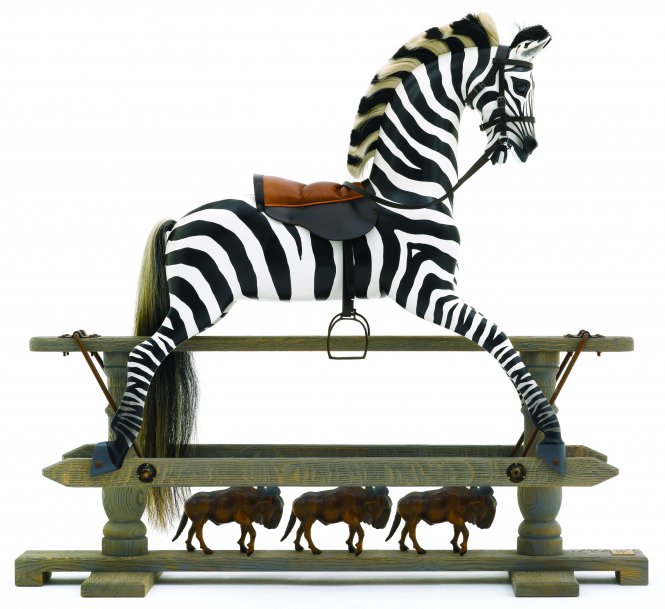 Behind the inconspicuous exterior of a white wooden weather board building in the heart of Bethersden Village in Kent, lies a treasure trove of exquisitely crafted toys.  A step back in time to when the ‘rocking horse’ was one of the most coveted of gifts in an age when enjoyment came from the simpler things in life.  In today’s digital age of smart toys and virtual reality, there is something emotive about the rocking horse, taking you back to an old-fashioned childhood filled with contentment, and the time to play.

Whether or not you were lucky enough to have had a rocking horse as a child, a visit to the Stevenson Brothers workshop is a very special one.  Admiring the stunning beauty of the finished pieces in the showroom and being guided through the production process is quite an experience. How often in this day and age can you see the creation of a toy, or anything else, in progress? The joy of watching each horse (or in some cases a zebra or a camel) being brought to life by the gifted craftsmen and women; the attention to detail second to none with every inch of the bespoke pieces created with the utmost care and precision. Each rocking horse is built to order and customers are able to choose everything from the wood type to the blanket colour and even the design of the bridle. Family tartans and real horse hair can be incorporated to complete the personal touch. 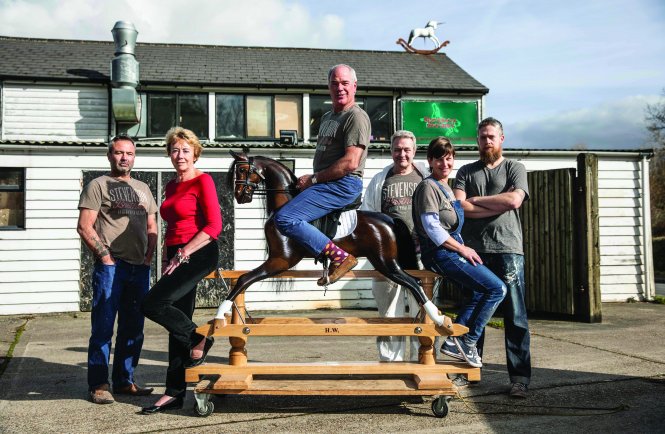 Each horse takes between three and four months to make from start to finish and, with around 10 horses in creation at any one time, the workshop can produce up to 175 each year.  Every horse is numbered and dated on a brass, silver or gold-plated plaque – making each piece more of a collectors’ item in future years.  Most of the horses are created in oak but other wood options are available and the choice is very much at the discretion of the buyer.  I am told that they source mainly home-grown timber, some oak and chestnut has been supplied by Windsor Great Park.  Since they began, Stevenson Brothers have produced over 9,000 horses, plus the odd zebra, camel, and unicorn.

They specialise in copying horses for customers and much of the work they do now involves commissions for replicas of the client’s own (real) horses.  They replicate everything, from the colour of the forelock to the style of the saddle; a professional Saddler is part of the team of extremely qualified artisans.  Famous horses that have been copied by the Stevenson Brothers workshop include Olympic World Champion Charlotte du Jardin’s horse ‘Valegro’, Sir AP McCoy’s horse ‘Synchronised’, and Zara Tindall’s horse ‘Toy Town’.

So how did it all start?  Having been taught to make Rocking Horses by their Uncle, James Bosworthwick - during an apprenticeship he charged them for - twin brothers Marc and Tony established Stevenson Brothers in 1982, initially working from in a shed on their sister’s farm.  After selling 15 horses in their first year, and recouping their initial investment, they upgraded to bigger premises, buying their first workshop in the village of Bethersden in 1983.  A couple of years later “having spoken to the Department of Trade & Industry and realising that we would have to get out and about and not rely on the world beating a path to our door,” Marc added that, “we booked a number of Toy Fairs around the world and took off on a six-week tour, starting in London, then Nuremberg, New York, LA and Sydney!  We showed just one horse on the stand at each show and took some miniatures as hand luggage.  Fortunately, we found a following and came back with a handful of orders and deposit cheques. We were in Business!”

The brothers’ big break came in 1988 when the Sultan of Brunei – then the richest man in the World - commissioned them to make a Merry-Go-Round to include 12 horses and 2 carriages.  Having seen a smaller version on display in Harrods, he was keen to have a larger replica for his second wife’s palace.  Following a memorable trip installing the Merry-Go-Round in its new home - high on a clifftop overlooking the sea - the brothers returned home and invested the subsequent profits in their premises, doubling the size of their workshop and adding a new showroom.  The rest, as they say, is history…

Now 38 years on, and with a client base to dream of, Stevenson Brothers are considered to be ‘the best makers of rocking horses in the world’.  Marc has taken a step back from the workshop and now mainly deals with the design, sales & marketing of the business as well as the nurturing of both old and new clients, whilst Tony manages the Machine shop. 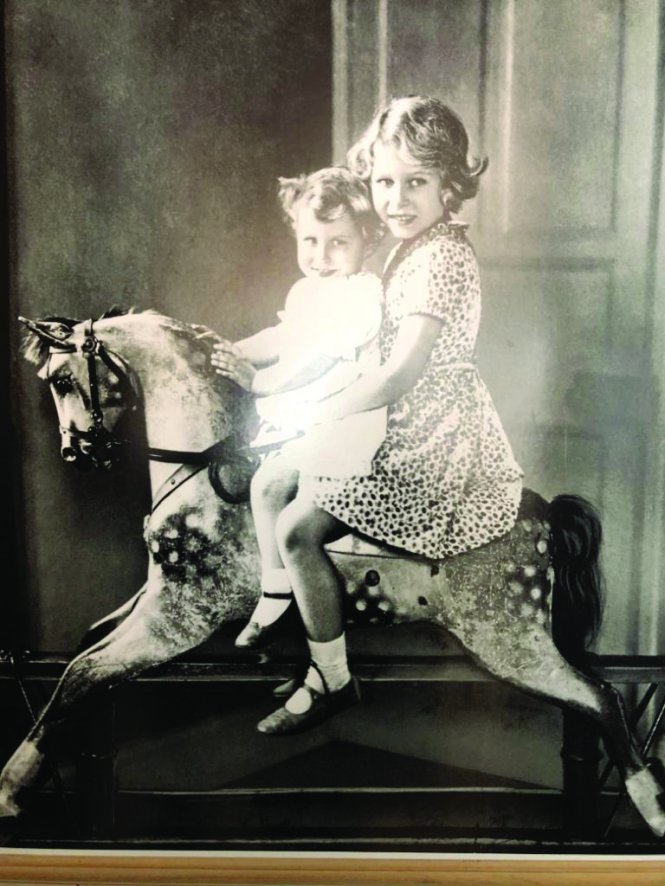 Restoration is a large part of the business and the ‘Rocking Horse Hospital’ is never empty, in fact, just like the NHS it has a waiting list! The hospital looks after antique and modern horses, made by both Stevenson Bros and other manufacturers.  Modelling techniques have come a long way over recent years, the surprisingly crude carving and, on occasion, the rather terrifying painted facial features of some of the early Victorian rocking horses, emphasises this.  These horses are lovingly given a new lease of life with the restorers taking great care to retain each horse’s individuality as well as its antique value.

Stevenson Brothers have received the ‘Royal Seal of Approval’ from royal families from across Europe and the Middle East.  Her Majesty the Queen has been the recipient of several commemorative rocking horses over the years.  The first was presented to her in 2002 to celebrate the Golden Jubilee.  When asked how this came about, Marc told me “I had a light bulb moment and wrote to her Majesty the Queen to let her know we were making a special rocking horse to commemorate her 50 years on the throne.  The Golden Jubilee rocking horse was born and we had a wonderful presentation in The Queen’s Yard at Windsor Castle”.  Other presentations have included ‘Tinkerbell’ a replica of the Queen’s favourite horse and subsequently, for the Diamond Jubilee in 2012, she was presented with a horse based on Sir Winston Churchill’s charger from 1896, to celebrate the special relationship between them. This particularly distinctive piece included an inlaid ‘bottom drawer’ housing a parchment envelope containing photographs of the Queen and Winston Churchill printed from the original negatives.  This ‘bottom drawer’ has been incorporated in the design of many rocking horses since, often housing special bottles of whisky!

Their showroom is adorned with photographs of clients, including various members of the Royal Family, musical legends such as Sir Paul McCartney and Rick Parfitt, and actors Joanna Lumley and Ewan McGregor who are amongst a galaxy of star owners.

Recent collaborations have included working with ballroom and Latin Dancers, Nuno and Rebecca Fernandes.  Inspired by crystals in their dancewear, they  gave the unique rocking horse a crystal finish. Working together, Stevenson Brothers and Fernandes Exquisite Creations took six months to create ‘Crystal’, Stevenson Brothers made the steel-grey dappled horse and the Fernandes’s embellished the horse by hand with over 82,000 crystals. Having sold in 2016, ‘Crystal’ became the world’s most valuable rocking horse and was the subject of the recently aired Channel 4 documentary “The World’s Most Expensive Toys”.

The limited-edition bespoke Collection now includes a Crystal Zebra, currently on display in Harrods, and the more recently added Unicorn. Always considering other items to add to their range, inspiration for something a little more unusual came during a trip to Dubai where the brothers met Sheik Mohammed bin Rashid Al Makhtoum, the Vice President and Ruler of Dubai.  He asked them to join him at the racetrack one night, at his horse and camel race track.  The camel racing was apparently so exciting to watch that it was during that evening that they came up with the idea for an addition to their collection. ‘Humphrey’, the rocking camel, went into production on their return and he was launched, to great acclaim, at The Game Fair later that year. 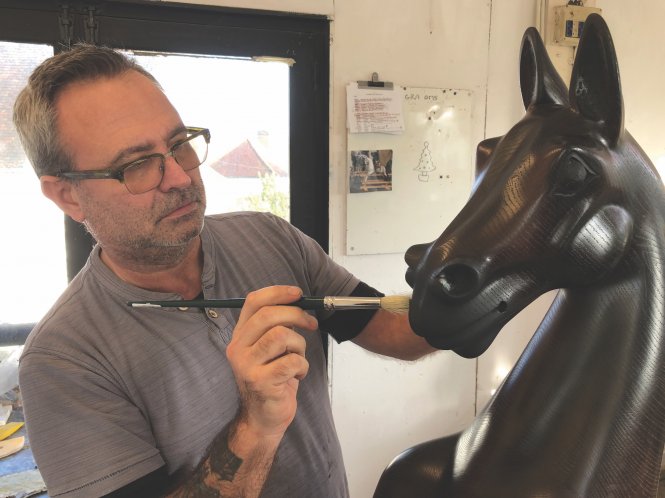 Marc and the team love nothing more than to welcome prospective buyers to their showroom and workshop.  Transport can be arranged from any of the 3 local railway stations and co-ordinates for a local airstrip are given to potential clients wishing to fly in.  Visits from parents with their children are particularly encouraged and, for a small charge, tours can be organised for groups from Schools and Colleges.  Marc added,

“We often have schools visiting , it’s a wonderful way for children to see real people, making real toys, here in England!  It’s a fascinating workshop and, with the Kent & Sussex Steam Railway line just down the road, it’s a great day out.  Visit us and commission your family heirloom!”

When asked about the future of the Stevenson Brothers, Marc told me that “It is getting to a time when we are considering stepping back and finding someone to take over who not only shares our love for the craft and our products but also has the knowledge and ability to increase our global brand. We will continue to run the company until the time is right and we feel that we are placing our cherished business into safe hands”.

To make an appointment to visit please call 01233 820363.  The Stevenson Brothers Rocking Horse showroom and workshop can be found in Bethersden, Kent TN26 3AP.

See more information and product photos on their website www.stevensonbros.com

Stevenson Brothers have an exclusive offer for our readers: Visit the workshop, place your order for a Rocking Horse and they will include embroidered saddlecloth, initialling and a special plaque at no extra charge.

Just to complete the day, lunch in the Stevenson Brothers Dining Room at the fabulous local Gastro Pub ‘The Pig & Sty’ will be on them! 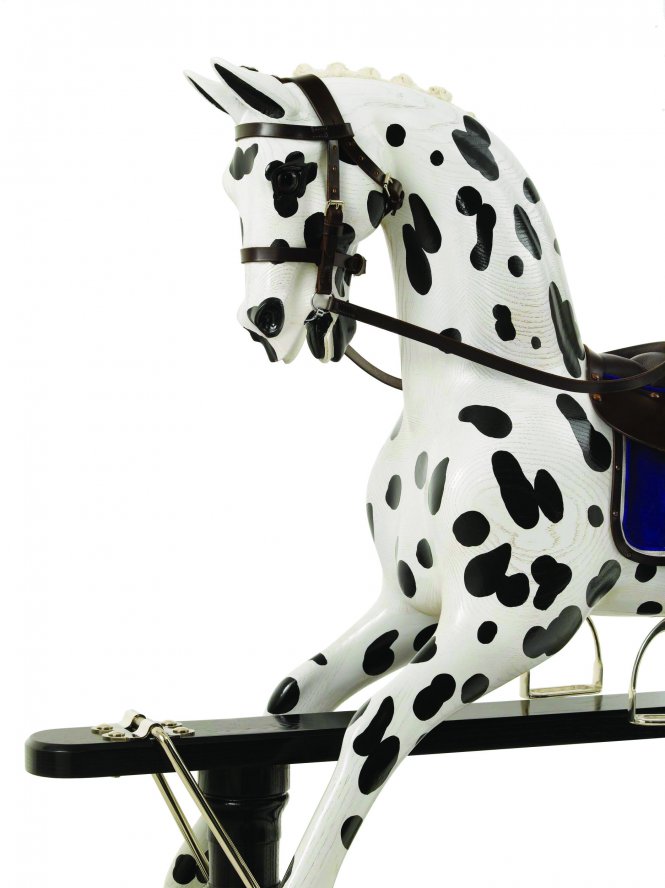